Okay can I actually remember any of this? *thinks* Yesterday the rain cleared up so we went to Featherdale Wildlife Park to puddle jump. We got the opportunity to pet so many animals - koalas, kangaroos (and cause I was ambitious - my beloved quokkas and some European Rabbits too *nods*). We had an ebil Emu following us around that wanted Mel's kangaroo food so he almost attacked her for it. There is an action shot, but you'll have to ask Zarina for it (a). Speaking of which, I actually stole her pics, cause I was being fantastically blonde yesterday and took a camera that had no film in it to take photos with. We appointed a few musketeers mascots that we wanted to take home with us, but unfortunately couldn't. Ellen even wanted a Tasmanian Devil but we got told it wasn't the wisest idea *snigger* Viscious creatures. And we spent the whole morning running around looking for stamps for our "passports" which was fun. And even got the Dingoes to wake up from their nap with some loud crash that gave us opportunities to take photos. So here's a few snaps from yesterday:

Zarina feeds another group of kangaroos

Mel makes a new friend, and tells the emu to back off after it attacked her

Mel & Julie with one of the musketeer mascots (a)

Following that we went down to the plaza for lunch and saw Batman Begins. It was actually pretty good, and I was trying to take mental notes for ficage (a) Ellen found a problem with the ending which was funny that you'd still be able to pick up continuity errors. We had a good time *nods* And then we came home shortly before going out to dinner and bowling with my friend Jenny which was good. Had issues with our shoe sizes but erm thank god for Euro comparisons the other day? LOL It was the only way we could work it out. Good Dutchies *nods* Zarina & Melly just flattened us all. Did very well :D And then we came home and they all ambushed Leo on msn for a catchup b4 bed ;)

Today we went up to the Blue Mountains and met another nice Aussie man who took pics for us, and we for him and his girlfriend who wanted him outta the pic *snigger* Lots of piccies today *nods* I made sure to put film in my camera this time LOL. So we saw the Three Sisters, and then we went for a stroll around the lookouts and engraved ourselves being there into the rock (although forgot to date it DOH!). Then we kept walking to the Giant Stairway and went down the first section of it that leads into the 3 Sisters rock formation and got more pics, and then went back up it. By the time we reached the top totally exhausted, we were glad we didn't go down any further (and that was the easy track hehe) It started spitting, but no rain, and we drove to the other side of the mountain to Scenic World where we caught the train down (very steep, but not fast anymore :( I wanted to scare them all). Poor Ellen got stuck in the smallest section being the tallest. Once down the bottom we got some pics around the various things there and Mel scared herself when she stood on a set of footprints at the bottom of some stairs that lit the inside of a furnace up which was funny. We took the Skyway cable car back up and just missed the waterfall *blush* and then made the long trip back home. Was a good day. Now more pictures:

Mel & Julie from one of the lookouts for the Three Sisters

Mel, Ellen & Julie on the walk

Mel vandalises the rock face with our presence

The completed work - 4 Musketeers Were Here

Zarina rides one of the Miner's horses

Okay, well we should be indulging in some horror movies and stuff shortly, so for those looking for pics of all the 4 Musketeers here we are ;) : 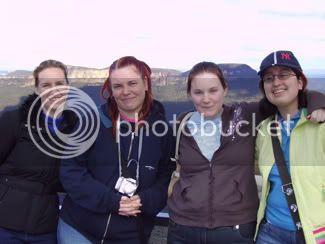 BACK: Julie & Ellen; FRONT: Mel & Zarina; on the train (well imitation one *snigger* but don't we look scared? (a) )
Collapse