Luna Park is Sydney's only theme park left now. It's been shut down so many times because of the neighbours claiming it was too noisy. That park has been there since the 1920's so there's no excuse - the people there moved there very well knowing what they were moving next to. So now that it's open, and cause El was requesting such yesterday, today was theme park day. And after waiting almost half an hour for MIA musketeers who were waiting up the other end of the station for me we finally got on our way. We grabbed some all day passes and headed straight for the Rotor. It's a round gravity machine, where you lean against the wall and it spins so fast that gravity holds you there, and the floor drops away. Well we went into this without anyone except me aware of what it was going to do (and no, I wasn't mean, I did tell them, they just weren't ready for the floor to fall away :p ). Poor turtle got upset while we were in the queue after losing one of her Di-Rect badges. She got hugs from us all. Can't say that that was what she was upset over, but it started the whole "Melly is mean because she makes people cry" tormenting thing. Okay, so maybe I am mean, but El went along with me (a) hehe.

After that we were feeling a little... unbalanced, and so we decided to just stroll along and check out what else was there. After we did that (and I only swore not to go on one of the rides) we went and grabbed some VERY expensive lunch (c'mon it was like $4.50 for a cup of chips, and $3.50 for water/$3.80 for soft drink - MUCH more expensive than the Gold Coast who has all the biggest amusement parks *nods*). Melly threw away turtle's lemon b4 she finished with it, and also tried to bite her finger off (continuation of the Melly is mean thing hehe). Zarina adopted one of the seagulls, she was throwing it chips and teaching it tricks as she tried to get it to somersault. I asked her what she was going to call the bird, and she replied "Mine" was very funny *nods*

After lunch we headed into Coney Island at Zarina's request. I tried to get in front of everyone so I could get pics, but SOME ppl were too quick for me. Needless to say I do have enough to post in this LJ at least ;) Melly got her palm read (er, I think LOL dunno if it worked properly), and she & El did this green ray prediciton thing but got the exact same result so Zarina & I didn't try it. We headed up to the machines and it was all fun cause they're only a dollar each. We took a Sex Appeal test and I think we all scored a 9/10 LOL. Um *thinks* Melly and I spotted one we missed so after we did the barrel (where poor Mel fell over and hurt her wrist - she almost couldn't get out, and turtle kept telling her to go back in so she could get the pic she missed :( ) we went up there and it was a um "What Type Of Lover Are You" kind of thing. Melly came up Harmless, I came up Hot Pants LMAO Didn't know I was so appealing. So next Zarina joined Mel & I and we went up to the slides and did the wavy one, then just Zarina and I went up to the straight one with a hump at the end which went much faster and was so much cooler. Then we went on the turkey walk thing and I was leaping really well on the first section, but couldn't get my rhythm right for the other 2. Got some throne pics and then found another $1 machine for "How Good A Kisser Are You" and I thought "Why not, missing my blog test things" hehe. So I did that and it spun around wildly and so the girls were teasing me, and then it finally landed on "Atomic - Experienced" LOL. Well if I'm gonna put together everything I got today, some guy is really missing out on something with me *nods* Tis funny. Lastly we went onto the spinning "Wheel of Joy" but Mel & I were the first ones sliding off, Zarina not long after (ebil children were pushing :( ) and one of the kids took out Mel, so again she got hurt :( Poor boo.

We took the back exit to the rides out the back and went straight over to hmm forget what they call it, but other places call it the cha-cha/spider. So Mel, El & I went on that one, and again my stomach wasn't quite right coming off (lucky I wasn't the guy that threw up though, Zarina gave us the full story when we came off) so I rested a little bit while Mel & El dared enough to go line up for the Ranger (which is like the caged version of the Pirate Ship) but they ran back chicken hehe. Then we went on the Dominator which is one row of seats, and it swings horizontally from side to side and around in a circle. That was funness *grin* We kept flying out of our seats LOL. And it got to the point where I started losing things, first my watch came unclipped but I was quick enough to notice & fix that, then my athame swung away around my neck so I pulled that back, and then finally my pocket ended up empty but THANKFULLY the mobile was still on the seat. If it had hit the metal beneath us from that height, I think I wouldn't have a phone anymore :( When that was over (and funner started being coined around hehe) we went on the flying swings and sat behind each other (Zarina, then me, then Mel, then Ellen) and the two girls closest to me kept tickling and poking me, and well can't say I wasn't doing the same to them *innocent whistle* Once we were airborne we were all flying like Peter Pan, Mel kept imitating she was running to catch up to me, it was funny. And I think at that point in time was when I started my foot grabbing expedition *snicker*

So finishing up the back, we made our way back to the front and climbed up to the Tumblebug which just goes around and around and swings the carriage outwards. So that was okay, and we took a short break after that. Then we headed further up and stopped at a nail place (they put pics on your nails) and Mel & Ellen got that done while Zarina & I headed to one of the open-mouthed clown games hoping for stuffed toys, but coming back with a small metal purse (me) and a gel-like photo album (Zarina) *sigh* Then we all went on the Tango Train (I call it Disco Train since that's the first name I had been on with it, but it's also called the Matterhorn as well). Mel & I sat together in front of Zarina & Ellen. That ride was hilarious, just to look back and see Zarina trying to yank herself away from Ellen (the force always plows the person on the inside into the person on the outside, I knew this that's why I opted for the outside ;) ) and just the strength of Ellen that she could hold Zarina halfway to the other side without being pressed against the wall! I was amazed. Mel was all concerned about squishing me but I didn't care. Um, yeah I was doing my foot grabby thing to them b4 we started too (a) but all is cool. And OMG I LOVE the guys who were working on that ride. The guy running it was like this cool dark dude who was a total DJ pro and knew how to get everyone reved up, and there was this blonde spiky haired dude that was one of the carriage attendants who was hyping everyone up too, clapping and shouting and ARGH it rocked! LOL. We were on it for so long, going forward and backwards, faster & slower, I swear he was ignoring the rest of the queue he was having so much fun with us. :D Was ultimate funness!

So after that we went back for our tattoos. I have pics of everyone up here so you know all about it ;) And the store was called something about scaring your mother or something LOL Just what I was saying would happen when I got home to my mum *nods* And Mel got one to freak out her sister too. Mel & Ellen already have tattoos anyway so not such a big deal to them. ;) Zarina & I wanted to have 4 Musketeer ones (like the LOTR cast did when they were all together) but unfortunately we didn't have a design for one or something :( Maybe next time.

So once that was over Ellen & I went on the Wild Mouse (she was determined to get on the rollercoaster LOL) and it wasn't too bad, little bit squishy cause we're both so tall *blush* but eh was good :D And after that we went up to the Space Shuttle where they were calling down for us to come on. After some convincing, I got Ellen & Mel to come with me and that was a round caged thing we spun around. Good tip - Always pays to have someone on your left. I didn't so I was sliding everywhere. Was okay though, made sure to zip things securely up in my jacket this time *nods* And I was so surprised at myself that I wasn't scared looking straight down. Was weirdness. Mel & Ellen were a laugh screaming out they were sorry, and they didn't do it, and all sorts of things LOL Zarina heard them all the way down from where she was trying to take pictures. And she stopped us on the walkway to take one but they wanted us off cause they had a queue now, so they were shouting out "Hey, Charlie's Angels, get a move-on" LOL And the only thing we really had left to go on was the ferris wheel, so we did that and tried to take pics of the Harbour Bridge from our carriage, and then it was time to go :( Over much too quickly. I was gonna stay with them for dinner but we couldn't find anywhere to eat, so I sent them on their way and came home. Now for piccies:

Ellen on the first moving walkway

Mel on the 2nd walkway

Zarina gets LOST *snigger* They were rubber thingies you walked through. Made a cool pic *nods*

Mine & Mel's attempt at uniting Bianca & Wyatt (well, our tribute, and Mel wanted to know if that meant they were really married now LOL) 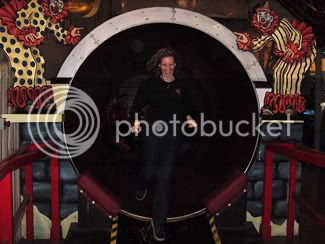 Julie running through the barrel (I didn't fall! *cheer*)

Ellen getting her airbrush tattoo

My tattoo *grin* I couldn't have a Phoenix birthmark, but I got a nice huge dagger to supplement hehe

Me showing off my tattoo in a Bianca-esque manouveour (seriously, I was quoting Charmed at the time - "Don't you recognise me, mom?" *holds up left arm to show mark on wrist* hehe)

So tomorrow is our last day of fun *sob* I'm gonna take them to Taronga Zoo, and then hopefully we'll have enough time to go on one last shopping trip, and then we'll go to Hard Rock Cafe and try AGAIN to have dinner there *nods* Will be sad, our last supper.
Collapse